Unlike other parts of my blog, this page is not intended to be funny. I deliberately try to avoid topics of a serious nature because the real news is depressing enough. Anyone who is interested in learning more about how I came to be in this particular point in space and time, by all means, read on. Consider yourself warned: This page is not funny.

2005 was a watershed year for me. I had spent the previous nine years working for what was supposed to be a growing innovative technology company. In the past, I had surrendered an abundance of evenings and weekends, and cut short many vacations, to unpaid commitment time for this organization in the anticipation that some day there would be a payoff.

A few years earlier, the company I had started with was bought out by the local Telco, and that monolithic organization promptly began parachuting its deadwood into positions where they could do the most harm. The errant changes in management, and their subsequent brain damaged decisions, had made it clear that employees served only to inflate the egos of an incredibly arrogant, self-aggrandizing executive. It had become obvious to me that the company was inevitably doomed. Past Annual Reports of our new owner demonstrated a pathological history of acquiring vibrant growing enterprises, destroying them, and ultimately listing them as discontinued operations when their doors were finally closed.

Also in 2005, a few friends and colleagues of mine had died young and unexpectedly. When I reflected upon how the frustrations of their working lives had made them bitter and angry, to the point that they had become unbearable to be around, I considered what personal changes they would have made in order to be happier people had they known that this would be their last year on Earth. You see, my plan had always been to save as much money as I could and retire as early as possible. I could put up without having toys and luxuries that offered short-term happiness if it meant I could gain financial independence a few days sooner, but I had never considered the possibility that I may not make it that long. I would have lived a joyless life of misery and deprivation for nothing.

In January of 2006, the company, as part of its if you don’t like it here, you can leave HR policy, had begun handing out copies of what next? [1] as part of the standard employee information package. This book is really intended as a final parting gift for the recently dismissed, but our droll executive thought it would be an ironic motivator for the proletariat to work hard for their weekly shiny nickels if they knew they were expendable (their retention strategy was rooted in Stockholm syndrome). I read the book cover-to-cover, and it is largely a crock of HR bullshit; people are not so easily reduced to categorization, and their needs not as readily quantified, as the author’s oversimplified thesis would have you believe. I did, however, get three key ideas from the read:

The author should have written these points on a 3 x 5 card, and left out all the filler worksheets from the book. After a few months of reflecting on these ideas, I needed to decide if I should change myself, my attitudes to work and life, or if I should change my employment situation. I felt that, in spite of my frustrations, I was exhibiting a great deal of commitment, determination, and perseverance towards my work, but I wanted to know if my co-workers saw it that way. If they did, I knew I was making a difference, and I would continue to work in the best interest of the organization. To find out, for my June 2006 performance review, I solicited feedback from several of my closest co-workers, and I asked that they submit an evaluation to my supervisor that considered the question of, am I making a meaningful contribution, or is my frustration getting in the way?

When I discussed the results of the evaluations with my supervisor, it was very clear that my personal frustrations with the managerial incompetence of the organization was getting in the way of any positive contribution that I thought I was making. Clearly, something had to change, but what?

The book takes a moral high ground approach when it comes to identifying and defining the parameters of personal needs assessment. Consider what is really important to you? Do you like helping people? Are you action oriented? Are you creative or hardworking? I am some, all, and none of these, depending on the time of day and the mood I am in. As I said, people are not so easily defined. Working through this problem space was going to take me some time.

Due to the typical management ineptitude, a project that I was supposed to complete in May had ended up starting in July, and I usually took my summer vacation in July. I was not happy about changing my plans, and neither was my family. I found myself in Waterloo, ON, in the middle of July. The daytime temperature was about 38 degrees C with 98% humidity, and the place reeked of sweat and cow manure. Waterloo is a literal shithole, and yes, I do know the difference between literal and figurative. Waterloo is a hole that the Mennonites have filled with cow shit, upon which someone else thought it would be a good idea to build a university, and they gave everything else to RIM. The most fun you can have in Waterloo is packing up and getting the hell out of there. My time spent there was not enjoyable.

It was Thursday night, and I had just gotten off the phone with my nine year old son, who was very upset with my being away during what was supposed to be our summer vacation. While I sat alone in my hotel room, I pondered my fundamental career needs, struggling to map what I wanted to what I felt I could get. My values were: vacation and free-time to spend with family, and the independence to pursue my own intellectual endeavors without interference. So, how do you start a job interview with, I am not hardworking, but I make up for it by being impossible to manage, and I need at least twelve weeks vacation, and still expect to get hired?

Call it a revelation or an epiphany, but I suddenly thought, High School teacher. That thought was immediately followed by, No, that will only give me eight weeks vacation. University professor. What do I need to do to become a university professor? I will need to get my Ph.D. Over the years, my wife and I had discussed my returning to university to do post-graduate work, but time and money never seemed to be available in sufficient quantities, and going to school part-time is never really practical. I immediately resolved to leave work and return to school full-time to get my Ph.D. in Electrical Engineering.

Friday morning, I flew home, and on Monday July 17, 2006, I handed my manager my resignation, effective July 30th. When you are the majority income provider for a family of five, resigning your job to go back to school is not an easy thing to do. Family and friends came out in droves to tell me I was doing a stupid thing, and considering that I had not even applied to a university, yet, I had to admit that I was taking a huge leap of faith. Many of my co-workers said that I was crazy for leaving my job voluntarily. When I predicted that the company would not last more than 18 months, “Make them fire you,” they would say, “you have been here for ten years, so they will have to pay you at least a year’s worth of severance.” I was not convinced that would be the case, and I did not want to end up on the street looking for work at the same time as everyone else, and being a few years older in reward for my patience.

In September 2006, at the age of 40, I started classes, and in May 2010, after expending every last financial resource that I had, I graduated with my Ph.D. You can get a copy of my dissertation here. Unable to find work in Canada, I broadened my employment search to the US, and in August 2011, 60% of my family relocated to New York City, where I currently teach Computer Engineering at Manhattan College.

My retirement plans have changed significantly. After going five years without pay, I have nothing left to retire on, so I will undoubtedly have to work until the day I die. The up-side is that I am significantly happier with the work I am doing. Not every single day, but on the overall balance, happier and more content. It is mid-June, a sunny and warm day outside, and I am free to spend it having drinks on my front porch.

Almost seven years ago, I decided in a hotel room, in the crappiest city in all of Canada, that I would get my Ph.D. and teach Engineering. Had I known that I was capable of the required level of self-actualization and follow-through to make manifest such an ambition, starting with a leap of faith, I would have done it a lot sooner. The company I used to work for closed its doors in January 2008, almost 18 months after I left. Many of the people who, back then, told me that I was dumb for leaving, now say that I am lucky for being where I am. In the words of Hermes Conrad,

When push comes to shove, you got to do what you love, even if it’s not a good idea.[2]

One thought on “My Background Story” 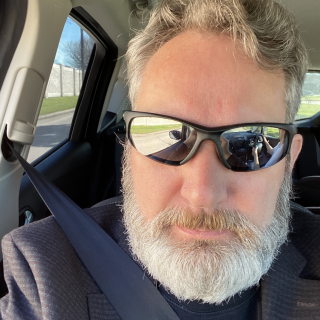